You are here: Home / About Adventures Online

Adventures Online designs, develops, maintains and hosts WordPress websites. The founder, Karen Callahan trains WordPress website owners how to update and maintain the content, and trains WordPress bloggers how to add SEO to a WordPress website. Karen writes custom PHP programs including WordPress plugins, sets up WordPress-website-ready environments for you to build your own WordPress website, performs Organic Search Engine Optimization, and offers WordPress website consulting and contracting services.
To complete your project, Karen may work independently, may partner with another professional, or assemble a team of professionals—depending on the scope of your business requirements. When Karen works with other business professionals, they are typically graphic designers, copywriters, videographers, drone pilots, printers, marketing and public relations professionals, business consultants, and the like. All project collaborators are experts in their field with whom Karen has developed a working relationship over the years. Each has years of experience, is based in New England, and works with Karen (no outsourcing) to accomplish your business goals.
Karen has extensive programming and database experience and is available on a contract basis to complete portions of larger Internet projects. Karen is often referred to as the “Web Developer that the Web Developers call.” Some sample PHP modules that Karen has developed.

Adventures Online was founded in 1997 by Karen Callahan, and since then, has evolved into a WordPress-centric business.

Professional Memberships:
Karen is an avid networker and participates in several business networking organizations. She is currently an active member of:

Throughout the years, Karen has been active in other networking groups. For example, she was a:

In 2014, Karen was a Board member for The Communicators Club in Worcester, MA, prior to which she had been a member for several years.

In the early years of the Internet, she was a founding member of the local chapter of the Association of Internet Professionals (AIP-495) and served on its Board of Directors in 1990-2000. She was also a member and 3-term Board member of The Women’s Network in Westborough, MA. 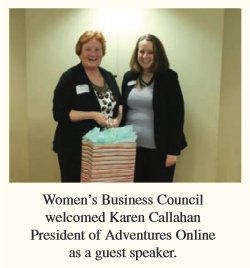